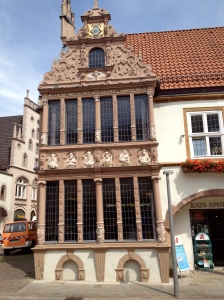 The town hall in Lemgo, Germany

A frustrated history professor once told our class, “Look, if you don’t like reading and you don’t like writing, maybe you need to change your major.” To reading and writing—a lot of it—I would add a third requirement, the thrill of the hunt. The historian lives to investigate the past, to figure out why thing are the way they are.

Four hundred years ago, in 1612, in German Westphalia the city council of Lemgo commissioned a carving of the ten wisest men in medicine on the town hall’s new façade.  The city wanted to recognize its historic role in building the first and only pharmacy for the people in the district of Lippe in 1550. The carvings are so sharp and deep that almost 400 years later the features are still clear and the writing legible. Among the ten physicians and alchemists commemorated here is al-Razi or Abū Bakr Muhammad ibn Zakarīyā al-Rāzī, holding an open book.

Why does this ninth-century physician and alchemist, from the Persian city of Rayy share recognition in northern Germany with the Greeks Galen and Hippocrates, the Catalan monk Raymond Lull, and Vesalius, the “father of anatomy”? Al-Razi, recognized in the Abassid Empire as a teacher and physician, became known as Rhazes in Europe in the thirteenth century through Latin translations of his authoritative medical books. He was a prolific writer. One list of his works names 89 on medicine, 21 on alchemy, and 74 on astronomy, philosophy, and other sciences. Two of his works became standard texts in European medical schools: the ninth volume of the Kitāb al-Manşūrī, called Nonus Almansoris, and the twenty-five volume al-Hāwī, known as Continens. These books continued to be taught and referred to by European physicians into the seventeenth century.

The tools of alchemy became the tools of pharmacy
[Landesmuseum, Braunschweig]

Yet it was most likely his alchemical writings that put him on the Lemgo pharmacy façade. Alchemy was more than efforts to convert lead into gold. It was chemistry in the making, the conversion of matter and separation of metals using heat, solvents, and sublimation. Mortar and pestles, flasks, funnels, crucibles– the equipment of alchemy was the equipment of the apothecary. The Swiss medical reformer Paracelsus, also portrayed in the Lemgo carving, not only had a background in mining, but knew alchemy well and used his knowledge to explore the use of chemicals in medicine.

Although alchemy was not taught in the universities, al-Razi’s writings were familiar to European alchemists through Latin translations, particularly his Kitab al-Asrar or Book of Secrets. This systematic book describes procedures in terms of required chemicals, equipment, and processes, without the theoretical or allegorical digressions that characterize many alchemical manuals. In their writings, European alchemists often referred to al-Razi by name either in connection with specific procedures or as a known authority. After all my years in the laboratory, his specifications of quantities, color change, timing, and temperature have a familiar ring.

Al-Razi became very important to me as the subject of my history master’s thesis, completed in 2008. Although my recent year in Germany was dedicated to research for my doctoral dissertation, I could not resist visiting Lemgo before I left to see for myself that portrait of al-Razi that I had first seen on the Lemgo web site. So Chuck and I set out from Wolfenbuttel on a sunny Fourth of July morning.  Wolfenbuttel and Lemgo are not far apart, but the route is not well-travelled. It took three trains and three hours to get to Lemgo.  Then we saw the figures that were carved in 1612, just before the outbreak of the Thirty Years’ War. There was al-Razi, side by side with the most famous names in early medical history, still holding his open book.

And I am convinced that it is not a medical text that al-Razi holds in his hands, but a laboratory manual. 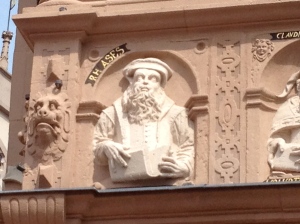 2 thoughts on “From the historian’s notebook: Finding al-Razi in Lemgo”