As if to emphasize alchemy’s enduring mystique, last Thursday’s Wall Street Journal (8/14/14)  includes two articles focused on this topic: “Fiction’s Digital Alchemist,” (http://online.wsj.com/articles/paulo-coelho-digital-juggernaut-1408055080) a discussion of the online outreach of Paul Coelho, author of The Alchemist (1988), and a review of a new production of Ben Jonson’s 1610 play, also titled, “The Alchemist” (http://online.wsj.com/articles/a-funny-mix-of-old-and-new-1408068621).

Although unrelated, both articles show a fascination with alchemy as a symbol of transformation of matter, of ideas, and of life. Jonson’s play first came to my attention while doing research seven years ago because of a stage direction which identifies the practice of alchemy with the laboratory.

Loud  music.    After  which  the  Scene  is  discovered ;  being a Laboratory or Alchemist’s work-
house :  VULCAN looking to the registers, while a CYCLOPE,  tending the fire,  to the cornets be-
gan to sing. (http://www.luminarium.org/editions/mercury.htm)

“Laboratory” was a new word in 1610, and its identification with a place where alchemy is carried out takes us to the beginning of laboratory history. Not only do both words relate to the transformation of matter, but both are connected to the materials and practices required to achieve material change: specialized glassware, controlled heat, measurements, color change, and, inevitably, a degree of secrecy. Although the alchemist in Jonson’s play is a fraud, playing on human longing for gold and eternal youth, even in his time the methods and tools of alchemy were more commonly used in more mundane tasks such as distilling medicines, purifying metals, assaying, dyeing, and making solvents. Nevertheless, literature from Chaucer to Jonson abounds with alchemists who profit from deceit, just as authors satirized physicians, lawyers, and clerics.

The Canterbury Tales satirized many walks of life.

But all thing, which that shineth as the gold,

Like alchemy in the seventeenth century, the modern laboratory has a split image.  It can be a trusted and authoritative location that tests our food and water or develops new medicines. Or it can be a suspect and hidden place where illicit substances are brewed and clandestine experiments unleash potent forces into an unsuspecting world.  Our fascination with the laboratory’s dark side today is reflected in wonderful stories about science running amok ranging from Frankenstein (1818) to Dawn of the Planet of the Apes (2014). 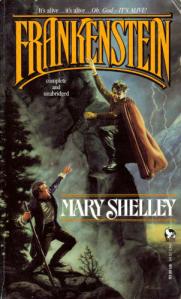 Frankenstein expressed the promise and the terror of a laboratory out of control.

The next morning, at daybreak, I summoned sufficient courage and unlocked the door of my laboratory.  The remains of the half-finished creature, whom I had destroyed, lay scattered on the floor, and I almost felt as if I had mangled the living flesh of a human being.

It was a virus created by scientists in a lab. You can’t honestly blame the apes?

Ellie in Dawn of the Planet of the Apes,

The contrasting images of alchemy are not commonly expressed today, which makes the conjunction of Jonson’s play and Coelho’s quest particularly fortuitous. In contrast to Jonson, Coelho recaptures alchemy as a process to find the treasure within, a common concept in the sixteenth century, but not often recognized today. The transformation of base metal into gold, a difficult and tedious process of repeated purification, symbolized the transformation of the soul. The alchemist who guides the shepherd boy’s search in this modern tale embodies the spiritual dimension of alchemy expressed in the Eighth Gate of Ripley’s Compound of Alchemy, published in 1591:

But when these to Sublymacyon continuall

That all is Whyte and purely made spirituall;

Than Hevyn uppon Erth must be reiterate,

Unto the Sowle wyth the Body be reincorporate:

That Erth becom all that afore was Hevyn,

To the alchemist in Coelho’s story, we are all alchemists: “Perhaps, if you were in a laboratory of alchemy, this would be the right to study the best way to understand the Emerald Tablet,” he tells the boy, while tracing symbols in the sand. “But you are in the desert. So immerse yourself in it.”

Good advice. And another one of alchemy’s many faces.

The Alchemist by Paul Coelho expresses a modern spiritual view of alchemy.