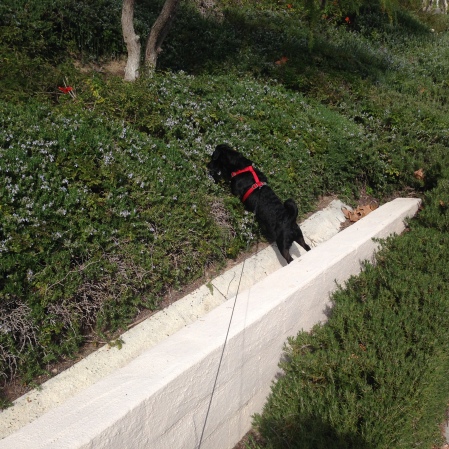 Ozzie tracks down a rustle in the rosemary.

Every day our noon walk takes us along a wall flanked by dense rosemary hedges buzzing with bees.  While Ozzie stalks the bees and lizards in the noonday sun, I wonder whether the rosemary growing in such profusion along the wall is the same as the cut rosemary you find washed and packaged in the grocery store.   A survey of herbal websites indicates that they are all Rosemarinus officinalis, although the plant comes in various forms, or cultivars.

The labeling does not state which cultivar this is. It looks just like the hedge by the wall to me.

Rosemary is native to Mediterranean lands, which accounts for its success in southern California, where it used extensively in landscaping and valued for its ability to resist drought and grow luxuriantly on sunny slopes.  The leaves look like pine sprigs and have a pungent fragrance that has made rosemary popular for centuries, whether woven in wreaths, burned as incense, flavoring foods, or brewed into medicines. The first-century Roman naturalist Pliny described it as Libanotis which “grows in a thin crumbly soil, and is generally sown in spots exposed to the falling dews .  . . some people give it the name of rosmarinum” [1]. The Latin ros refers to dew and marinum to the sea, reflecting the coastal climate of Italy as well as southern California, with its familiar nightly prediction of “early morning low clouds.”

The Greek physician Dioscorides, a contemporary of Pliny, noted that the Romans called it rosmarinus, and listed a variety of medical applications taken either internally, brewed into a tea, or externally as an ointment. It could cure jaundice, he reported, and relieve fatigue [2].  But most of all Rosemary makes me think of the sixteenth century when new Latin translations of Dioscorides’ De Materia Medica were introduced into European universities and  inspired the works of German physician/herbalists including Otto Brunfels (1489-1534), Hieronymus Bock (1498-1554), and Leonhart Fuchs (1501-86). 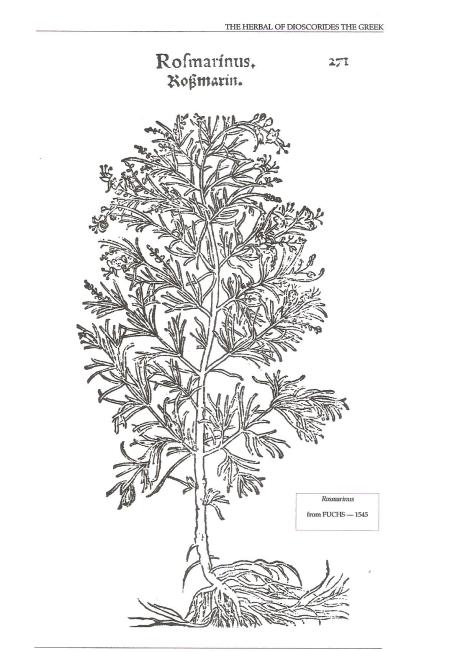 Rosemary in an herbal by Leonhart Fuchs, 1545.

These were the early years of the Protestant Reformation, and all three herbalists strongly promoted the use of medicinal plants that were native to German lands, rather than imported herbs and spices. Although not native to Germany, rosemary was firmly entrenched. Brunfels noted that it could, with careful cultivation and shelter from frost, be grown far north of its Mediterranean habitat. So acceptable was rosemary, in fact, that he filled a whole page with its medicinal uses [4].  An apothecary, Walther Hermann Ryff (1500-48), referred to rosemary as a “guest” that comes from France. You can distill a “good strong precious oil from it,” he wrote useful for headaches and stomach ailments, for example [4]. It must have been precious indeed.  According to A Modern Herbal, “From 100 lb. of the flowering tops, 8 oz. of the oil are usually obtained.” [5] 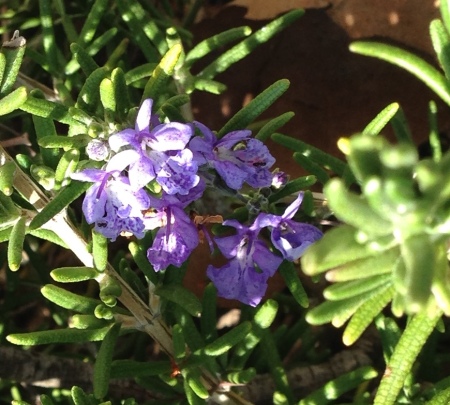 The flowers are tiny and intensely blue.

Because the rosemary Ozzie and I pass daily grows against a wall and buzzes with bees in the sunlight, I was delighted with a quote attributed to Sir Thomas More (1478-1535), the English Renaissance humanist and saint who was executed for defying King Henry VIII.  The quote begins:

“As for Rosemarie, I let it run alle over my garden walls, not onlie because my Bees love it, but because ‘tis the herb sacred to Remembrance, and therefore to Friendship.” [6] 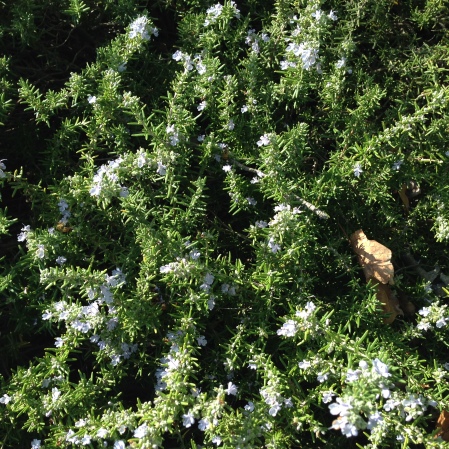 Rosemary buzzing with bees in the sunlight.

Unfortunately, upon further investigation, this lovely passage turns out to be authored by a nineteenth-century writer Anne Manning (1807-1879) in The Household of Sir Thomas More, a fictional diary of More’s daughter Margaret published in 1851 but written in the style of the sixteenth-century [7]. Manning’s work is based on a biography of More written by Margaret’s husband William Roper, so I hoped to perhaps find the quote there, but, alas, I did not, so it appears that it was written by Manning, not More.

Nevertheless, it’s a pretty quote which perfectly expresses how rosemary brightens these short winter days, with its blue-flowered fragrance and its message of friendship, remembrance, and healing.

“For you there’s Rosemary and Rue; these keep

Seeming and savour,  all the winter long:

Grace, and remembrance, be to you both,

And welcome to our shearing!

[6] Attributed to Thomas More on many web sites, and, for example, in The Plant-lore and Garden-craft of Shakespeare by Henry Nicholson Ellacombe, 1884, p. 257. Available on Google Books.

[7] Anne Manning, The Household of Sir Thomas More, pp. 21-22, 1851. Note: In trying to track down the source of More’s alleged quote, I have to thank Wikiquote (under Thomas More) for pointing out that the error was identified in a newsletter of an historical society called Kingdom of Lohac ( http://lochac.sca.org/herb/ ) active in Australia and New Zealand.  Here I found Anne Manning’s name. Her book is available on Google Books, as is William Roper’s. What a treasure this on-line library is!

If you want to delve further, here are two useful sites:

Article in Sunset Magazine, discussing varieties of rosemary for landscapes and cooking.

From The United States National Arboretum

And there are many more!